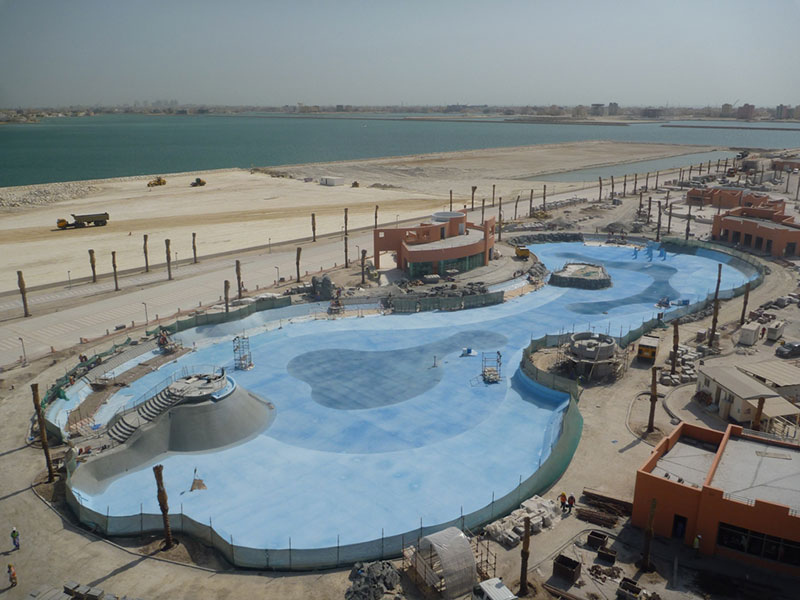 Nukote Coating Systems were specified in the original design drawings by the Architect who had experience with our products on previous projects in the Middle East.The system specified was a composite elastomeric system applied to a cementatious substrate consisting of an aromatic polyurea base membrane and a three color aliphatic top coat.This project started in the hottest months of the year with extreme heat and humidity’s during application. The coatings were applied to a inding slab. The client’s chose to use Nukote superior polymers for their color variability and stability, superiorelongation properties and speed of applicationleaving no possibility for use of traditional

The project included rock formations and other water feature aspects adding to its complexity. The three color scheme utilized was initiated to make the water feature appear to be part of the Arabian Gulf which is directly adjacent, and this with just 600mm of depth in the lagoon.

Nukote technical personnel supervised the application in total, from start to finish using local affiliated coating applicators and was able to complete the project in only 2 weeks with no seams or joints in the membrane liner. This completion level was achieved in the midst of public riots and military presence during the Arab Spring.

The water body was coated with the composite Nukote ST/AL coating system over 75 mm thick plain cement concrete slabs. The substrate was coated with Nukote EP Prime II at 100m nominal thickness followed by a Nukote ST base coat of 1.2mm and a Nukote AL (Aliphatic) blue top coat at 0.8mm. Three different top coat blue color shades were used. Light blue was applied on sides/slopes and medium blue and dark blue towards the centers. It gives an appearance of deeper depth when filled with water. 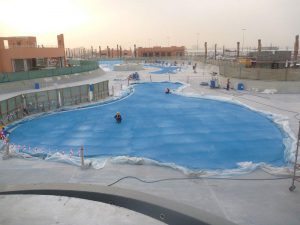 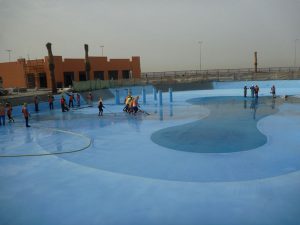 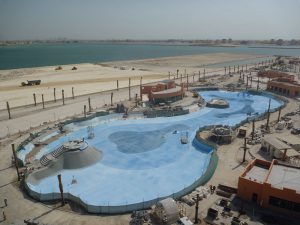